He was just a little fur ball. He would start running and just trip and roll around.  Didn't take him long to figure out how to chase the other dogs and follow along.  He is the most mellow of all our dachshunds.  He just loves to sit and swing with you in the back yard swing or he loves to play and just be with the other dogs. He gets really happy to play with the kids in the neighborhood.  He is our long-hair mini dapple dachshund and weighs around 12 pounds.  He has had some very pretty puppies with those beautiful colors of silver, red, black and whites.  He has retired from breeding. 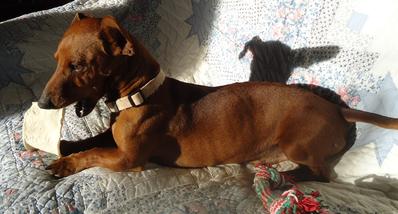 He came into our home in May so full of energy and he has never slowed down, he is our athletic dachshund.  Every day, several times daily, he does his routine work-out; out the doggie door, up around the back yard perimeter, back down the hill, under the deck and around the yard again.  No fat on his body. He is one lean, mean, fighting machine - not really - he is one loving, snuggling dachshund and Loves his daddy.  He weighs about 10 pounds soaking wet.  He is a solid red short hair mini-dachshund. He has retired from breeding. 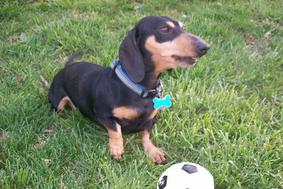 He came to our home as a tiny little puppy, taking his first trip with us within just a few days and has continuing taking trips with us since.  Loves to travel and watch the world go by.  He is our ball-playing dachshund.  We have many balls placd high up on a shelf to keep him from playing, playing and playing all day long.  He is a short-hair black and tan mini-dachshund and weighs approximately 11 pounds. He has sired some very pretty puppies with each of our girls.  He is also one of our "talkers" - he has never met a stranger and always welcomes all visitors into our home. He crossed the Rainbow Bridge March 12, 2019 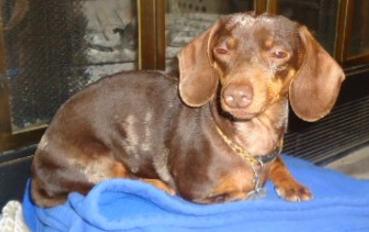 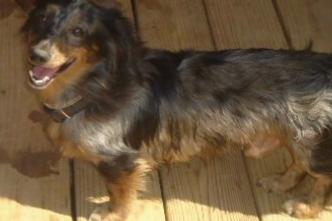 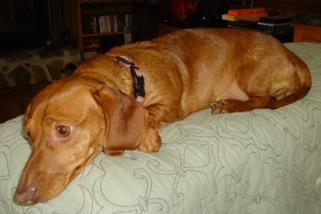 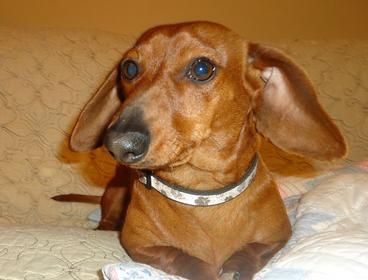 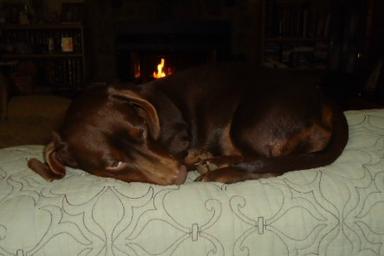 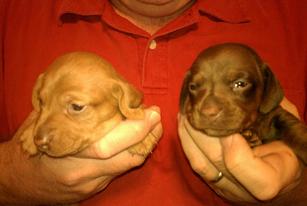 She is our smallest mini dachshund and weighs only 8 pounds.  She is a dapple with chocolate, cream and red as her colors.  She is also a smooth short hair dachshund.  Cassie is our "baby sitter" since she not longer  is able to have her own litter of puppies.  Everyone that comes to visit falls in love with her and enjoys her company.  After two c-sections we decided to not breed Cassie and just let her enjoy all the other puppies in our home.  We only have one problem with Cassie - she can't hold her licker!  (She is no longer breeding, she is out sweet little licker.)

Cinni Safrass Tittle  - we had the hardest time picking out her name, so we let our Facebook friends vote - We put both names Cinnamon and Safrass out on the internet for a vote and the one with the most votes would become her name - that didn't work, it was a tie. So we just put both names together and she became Cinni Safrass, we call her Cinni.  She is a little lovable doll-baby and she has become a talker. She is a short-hair red with a unique braid design in her tail hairs and weighs around 11 pounds. She has retired from breeding.

Coco Chanel Tittle was, of course, named due to her color. She is a spunky little girl that loves to play and has a completely different personally than her sister, Cinni.  Where Cinni is more mellow - Coco is very active and, loves to be on the go. She is more vocal and will bark to get your attention if you haven't spoken to her when you come into the room. She also loves to play with the neighborhood kids and if you get out a leash, she thinks she should be taken for a walk. Coco weights about 10 pounds with short hair that is dark chocolate, she has had several chocolate and red puppies.  (She is no longer breeding, she is just our loving pet.)

Coco Chanel Tittle and Cinni Safrass Tittle, These girls are sisters and were born March 03, 2012

We fell in love with both of the girls when we went to visit.  They were both so precious and Allan wanted the Chocolate color and I wanted the Cinnamon color so we just took both.  Both girls have retired from breeding .

Our last adoption (or so we thought), she actually has the same mother as Chloe. She is a short-hair smooth red mini-dachshund. and weighs about 10 pounds  She is spunky, full-of life and plays, plays, plays all day long.  She loves to drag the other girls around by their collars and is one of our roughest players of all our girls.  She loves to be outdoors and sneaks out into the backyard any chance she gets. She has retired from breeding.

​In August 2019, we adopted a male and 3 female dachshunds to add to our pack - These sweeties will be our breeders in 2021.
​
Rusty So-Lo, June 19, 2019.  He is a rambunctious red short-hair male.  Full of spit and vinegar. Loves to face challenges head on and backs down from nothing and no one.

Tammy Jolene, July 19, 2019.  She is a little sweety that loves to cuddle, she is very vocal when Rusty is bugging her.

Hazel Grace,September 19, 2019. She is a Chocolate and the daughter to Cinni.  She is a mama's girl and sticks by Cinni's side.

Ginger Snap, September 04, 2019. She is a long hair dapple but her main color is red.  She is a little stinker, loving to play and sneak past our gates and doors to access parts of the "forbidden rooms".  I am constantly having to search to find her.

Dixie Crystal, July 23, 2020. She is a black & red dachshund.  She loves chasing all the dogs around out back yard.  She has a sweet personality and thinks she is leader of the pack. (please note I said think)

And finally we adopted Remington Scout in May 2021.  He is a feisty little long hair chocolate male.  We call him Scout.  He is a small little boy but thinks he is as big as any of our other dachshunds.